WhAt ShE FouNd oUT

Tara always heard her name whispered in corridors. It wasn’t the hush-hush “bad gossip”, in fact anytime she heard it her face lit. Her name was mentioned with great awe. They all envied her. Everyone felt she had it all and with little effort. Although some called her obnoxious, spoilt and carefree; she couldn’t be bothered.
She prided herself in the fact that all her ‘eye-catching’ possessions and spending money were legitimate. She didn’t have to sleep around, beg or steal to get the money. Her Daddy gave it to her. it wasn’t her fault that her Dad was shrewd  and she had to keep inventing authentic  foolproof reasons why she needed money.
At an early age of seven, she had learnt that Daddy won’t give her five Naira to buy sweets but would happily give her five hundred Naira to buy a non-existent textbook. As she grew older her schemes became more convincing and tactful. By Js2 she could forge her principals and the school bursar’s signatures in her sleep. She reasoned her father had too much money to spare and since she had worked hard thinking and executing her schemes, she was worthy of a pay all the same, plus she hadn’t  begged him to knock her mother up so he was responsible for catering to her needs. 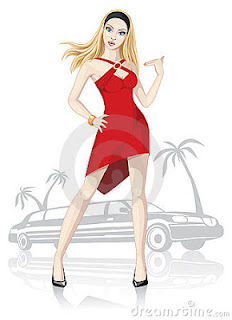 She kept living life like a normal girl her age but with the occasional scamming and scheming until one fateful day. She had come home unexpectedly and saw the unsayable…
It’s funny how a little coincidence can change one’s fate. Her teachers were correct; KNOWLEDGE IS POWER! Now she no longer had to crack her brain thinking of schemes for poor old Daddy. BLACKMAIL-was much better and its rewards more gratifying. Daddy loved his position in society and church to risk the ‘truth’ leaking out and he also depended on her for the “robe of respectability” that having adorable daughter endowed him.

[Cee’s note: Since my blog readers are great thinkers… I’m curious to know what you think Tara found out that ‘fateful day’…]